I cannot believe I haven't posted anything since 2015. Time sure does fly when you are having fun.

Anyway, in 2015 we decided to winter further south in Florida and after visiting a number of locations we settled in Bradenton, but our move proved the old adage that the grass might look greener on the other side of the fence, but it rarely is. The Bradenton area itself was awesome, except for the noseeums. These almost invisible bloodsucking insects can make life outside almost unbearable. Mosquitos are welcome guests compared to these mini-demons. The only way to be outside, day or night, was to have at least one fan blowing directly on you and to soak oneself in insect repellent, which is not a pleasant thing in itself.

We endured until the end of March 2016 and then headed west to the Grand Canyon,  Meteor Crater, Zion and Bryce Canyon National Parks, and other points in Arizona, Utah, Oregon, New Mexico, etc. We toured the west for about five months and then came back to the eastern seaboard to visit our children and other family members, ending up in the Florida panhandle for the winter.

We plan to go to the Florida Keys again for 3-4 weeks in October - November.


Posted by David and Derita at 2:08 PM No comments:

Just a quick update on where we have been the past couple of years. Three years ago (my how time flies) we moved down to Destin after spending a  very cold and rainy winter in Pigeon Forge, Tn. We stayed in Destin for about 18 months and decided to go back to Panama City Beach where we have a lot of friends. We were there until September 2015 when we decided to head further south where it is warmer in the winter months. So, here we are in Palmetto, Florida. Sarasota, St. Petersburg and Tampa are just minutes away and so far we really do like it here.
Posted by David and Derita at 3:55 AM No comments:

We have really neglected postings to our blog and we have no real excuses. We do promise to do a better job from here on out.

After returning from our outstanding 6 month trip out west in September 2012, we stayed in Panama City Beach until the first of November. Apparently we suffered a mass psychosis and decided to spend the winter in Pigeon Forge, Tennessee. In the winter. What were we thinking? We don't have a clue. On our second day in Pigeon Forge, it snowed, sleeted and rained, all in the same day. Frankly, that was pretty much the norm for the rest of our stay. After four months of frigid temperatures, and various types of frozen precipitation, we called it quits and rented a space across from the Gulf of Mexico in Miramar Beach, Florida. Since we have wintered in the Panama City Beach and Destin area for the last 5 years, we decided to move our residence from Georgia to Florida. We are now Florida residents (since April 2013) and we are enjoying all the benefits of living in Florida. To celebrate, we bought two small scooters and during warm weather we mostly use them for all our transportation needs, as well as for pleasure rides.

We plan to remain in this area and use it for our home base and do all our travelling from here. Our nest short trip will be to the huge RV show ion Tampa during the third week in January 2014.

Posted by David and Derita at 5:59 AM No comments: 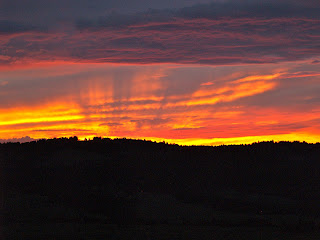 Well we are back in the Kentucky area where we feel pretty close to home. It has been a really fun trip but we didn't make it to Bryce, Zion and Grand Canyon due to motorhome problems. We decided we will just have to make another trip next summer. I am happy to report right now all of our problems with the motorhome have been resolved.

Before we return to Georgia/Florida we are going to Pigeon Forge, Tennessee to see our friends, Louie and Phyllis. 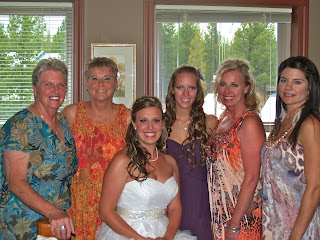 The Montana wedding was a beautiful occasion and of course all the ladies in our group looked pretty as ever. LOL Pictured above: My mother Juanita, me, niece and bride Aubree, my other niece Natalie, my sister mother of the bride Lisa, and my sister-in-law Kelly. As you can see in the back ground the sun is shining and it is a beautiful day. Right after the outdoor ceremony started the rain begin to fall, at one point I thought it was going to hail. The entire wedding party were real troopers and the ceremony continued like the sun was still shining. Even the guest with the exception of us southerners sat there like it was nothing. Of course the booze had been flowing prior to the wedding. It was really amazing after they were married the rain stopped and the sun came back out. It did make the temperature drop about 20 degrees so instead of in the low 80's it was in the low 60's. Before the night was over everyone had on coats and they moved a little gas campfire in the tent area. The next day I was told the party kept going until 3:00 in the morning. David and I lasted until about 11:00 and I had danced until my feet were sore.

Two days prior to the wedding about 10 of us took our campers up to the lodge where the wedding was held and parked in a parking lot across the street. This is where they all park when they ride snow mobiles in the winter. It is way up in the wilderness where you have no phone service and the lodge works solely on solar panels, they are completely off the grid. It is a beautiful location but I would have never found it had it not been for my sister. We have learned to dry camp much better than I thought we could. Of course we have a generator and big water and sewage tanks. Some of this group did not have all the luxury but they say this is the way they camp all the time. It is fine with me for a while but not all the time. I guess I am spoiled. The bride and groom had such a good time they didn't even stay in the bridal suite at the lodge instead they stayed in a tent in the parking with all of us. Go Figure, kids these days!!!!!!!!!! If I had known that I would have stayed in the bridal suite. LOL They are a very beautiful couple with great families that do a lot of stuff together. I know they will be very, very happy.

We are on our way back to Iowa where I was hoping I would never have to go again but this time we are going to Moscow, Iowa to get our hydraulic pump fixed. We have been without all our slides and jacks for three weeks. I am so thankful we were at my sister's house because I would have been crazy. It really makes me sick to my stomach in the  motorhome because of the movement.  Tonight we are at a campground sorta out in the woods and I am able to sit outside without burning up so I thought I better update everyone. Hopefully out hydraulics will be covered under the extended warranty.

Posted by David and Derita at 4:31 PM No comments: 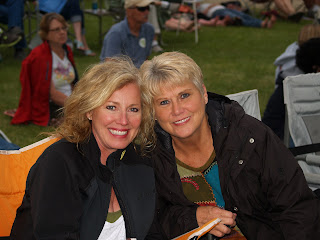 We are still hanging out in Butte, Montana at my sister's house waiting on the wedding. My mother arrived last Thursday and my brother and his family will arrive this Wednesday. The groom's family will be arriving on Tuesday. The date will be here before we know

I have to say they know how to throw a wedding shower, with lots of wild but fun games, jello shooters, cupcakes with alcohol in them and some kind of punch. Needless to say everyone had a really good time.

We attended the Montana Folk Festival while we have been here. It is a weekend filled with all kinds of music, booze, good food and lots of crafts.  The picture I posted is of my sister, Lisa and myself at the festival. We have also done some sight-seeing in the area. This is a beautiful town located down in a valley surrounded by mountains. It is amazing how hot it gets in the day but cool enough for jackets at night and in the mornings. Along with the wedding this weekend they have Evil Knievel weekend. All I know about this is they have lots of booze, motorcycles and food. We hope to go uptown for the event between wedding preparations. We will leave Butte the Monday after the wedding.
Posted by David and Derita at 12:16 PM No comments: 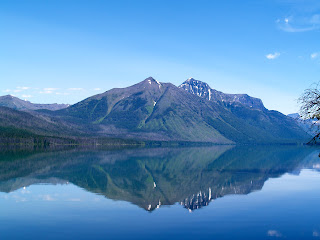 If anyone is reading this they know I haven't posted in several days. Our internet and telephone connections have been spotty. I have actually done pretty good without phone service.  After we left Red Lodge, Mt. we arrived at my sister's house and stayed there for four nights. We left their house and headed to Glacier National Park. Yesterday we went through Glacier Park starting in West Glacier over Sun Road to East Glacier. Upon arrival in East Glacier we were very close to the Canadian Border so we decided we would go to Waterton which is the Canadian side of Glacier. Once we got to the border we looked and between us we only had about $30.00 cash and we figured our bank would not let us use our ATM cards in another country without notifying them. The nearest ATM machine was about 25 miles back. We also forgot to call our insurance agent to see if we would be covered if involved in an accident in another country. The only we did right was take our passports. The more we thought about it we were just not comfortable going until we did all our research. So to all our Canadian friends we tried but just didn't make it into your beautiful country.

We really enjoyed Glacier views and the 50 mile drive over Sun Road. I have never seen water so green, so clear and so cold. We didn't take any hikes just a few short walks because everywhere you looked there were signs warning of bears. If a bear had gotten after us we knew we had no chance in hell in getting away from it.

Bear Tooth Pass is still in the lead as for as beauty and solitude.
Posted by David and Derita at 9:42 PM 1 comment: