We are in our 4th month of full time RV'ing, and it just keeps getting better and better. What we like most about it, other than the sense of absolute freedom it brings, is meeting new people every day. Yesterday a couple arrived in the park driving one of the new luxury super class C motor homes. This one was 42 feet and built on a Freightliner chassis, and it was an eye catcher. We were walking around the park and the owners (they are from Cincinnati) started a conversation that lasted about an hour and ended with a tour of their rig, which was very impressive. He was three years from retirement and his wife was already retired, and they were going to join the ranks of the full timers as soon as he retired. They are vacationing here for a week.
Posted by David and Derita at 3:49 AM No comments:

Hurricane Gustav and Other Stuff

Just a few days after hurricane Fay (all we had was moderate rain and winds), along came hurricane Gustav. For a while, the initial track projections had it headed straight for us, but it came ashore in south Texas, and our weather here was not even affected.

Our realtor called us and said that a young family had made an offer on the house, and after a day of back and forth negotiations they had a contract to buy it. Closing was a couple of weeks ago, and we are now homeless (in the traditional sense).

For the past three months we have been living in a 24 foot class C motor home. To say that our living quarters were a bit cramped is a tremendous understatement, so while we were home for the house closing we found a new motor home that we really liked. After some negotiations we are now living in a 38 foot Winnebago Adventurer. 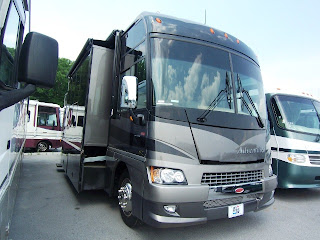 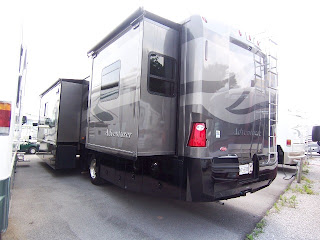 Posted by David and Derita at 12:50 AM No comments: