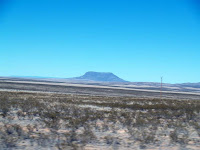 A lot has happened since our last post. We completed our commitment at Camping on the Gulf in Destin, Fl. in September, 2009, and we headed home to be with the kids and family for the holidays. We served as campground hosts in one of Georgia's state parks from October through the middle of December, and on December 28 we headed back to Florida to see some old friends. We stayed in Panama City Beach for about a week, then we headed west toward Tucson, Az.

We spent the first night on the road in Biloxi, MS. Derita and a group from Emerald Coast RV Beach Resort went to the Beau Rivage Casino in Biloxi last winter, but I had never even been in a casino, so that was one of the things we planned to do. By the time we had everything set up, showered and dressed to go out, the temperature had fallen to 19 degrees, and we decided to just go out for dinner. One of the staff at the RV Resort suggested that we eat at The Biloxi Schooner, which was fairly close by. The restaurant turned out to be an unpretentious storefront restaurant serving excellent seafood at very reasonable prices. If you happen to be in Biloxi and want good seafood, plan to go to The Biloxi Schooner, but don't dress up. It is not that kind of place. It is located only a couple of blocks from the Beau Rivage Casino.

After leaving Biloxi, we planned to spend a couple of days in New Orleans, but the cold wave was producing record low temperatures so we decided to make that stop some other time. Our second stop was in Lake Charles, LA. Crossing the Lake Charles bridge is an eye opening experience. As you approach the bridge it appears to be at a 45 degree angle. It really is steep, but once actually on the bridge it is not as steep as it appears.

From there we made it to San Antonio, TX. where we stayed 3 days. Everyone told us to be sure to go to San Antonio's Riverwalk, so the morning after our arrival we headed downtown. When we went down to Riverwalk, the river was bone dry. The city closes the river each year to clean the river bed, and that usually takes place in late January. City officials must have known we were coming because they closed the river two weeks earlier than usual.

The Alamo was very interesting. I think everything we know about the Alamo is derived from the movies, particularly the one starring John Wayne. Reality is quite different. The movie pictured a high walled compound that appeared to be somewhat easy to defend. The real Alamo is much smaller than depicted in the movie and the walls are not much higher than a tall person's head. The small museum on site has some interesting items, but several of the exhibits were being renovated when we visited.

After leaving San Antonio, we stayed the night at Fort Stockton and then headed to Carlsbad, NM. We stayed three days in Carlsbad where we toured the caverns. We stayed at the Carlsbad KOA. Everything about the Carlsbad KOA is absolutely top notch. They have a restaurant on site and if you prefer not to eat in they will deliver your order to your site at a time you specify.
The barbecue ribs were a big hit.

Las Cruces is a beautiful city with breathtaking scenery. Of course we had to visit Old Mesilla and eat at La Posta. The restaurant is an old stage coach stop on the El Paso - Los Angeles route. Just down from La Posta and across the street is the building where Billy the Kid was tried and sentenced to death. He killed two deputies there when he escaped.

We are now in Tucson and the sunsets here are absolutely incredible. I have never seen anything like them. Even the fabled sunsets in Key West can't rival the ones seen here. The air out here is crystal clear and one can see incredible distances with almost total clarity. A mountain range can look to be so close as to be able to walk to the base of the mountains in just a few minutes, but will take an hour or more to reach using a car.

Arizona (and the west, actually) is not what I expected it to be. I imagined the desert part of it as being flat and dusty with arid expanses as far as the eye could see, and maybe that is accurate in areas that I have not yet seen. What I have seen, however, coming from Las Cruces, NM to Tucson, to Tombstone and to Las Vegas, NV, is hauntingly beautiful vistas that include some of the most beautiful mountain ranges I have ever seen, and in every direction you look. Even the desert has its own beauty that I find hard to accurately describe. If you live back east and have never been "out west", then you are destined to never see the sky in all its glory. A blue so blue that it literally defies description. At night the stars seem close enough to touch, and the sky is filled with them. Last week we had a full moon, and it looked as if it was just beyond arms length. I suppose that the air clarity accounts for this. I now can easily understand why people who came out here from New York, Pennsylvania, etc. back in the late 1800's never went back. To go back east will be like seeing things in black and white, or in shades of gray, at least for a while.

Today (February 2, 2010) we are in Las Vegas after driving up yesterday from Tucson. This is our first time here. Our hotel is located near the Fremont Street Experience, which has the largest big screen television in the world. The screen is suspended overhead and extends for a full city block (press the video button on our web page and select Fremont Street Experience - Las Vegas).

Not being much for gambling, we spent most of the next day walking on the "strip" touring the casinos. I have to say we were very impressed with some of them, particularly the Bellagio with the dancing fountains, the Venetian's gondoliers, Caesars Palace and other casinos too numerous to mention.

We visited the pawn shop featured on the History Channel's Pawn Stars. It was around 7:00 pm when we went by so none of the people featured on the show were there. We went back the next morning, but there was a long line waiting to get in because they were filming new episodes. We decided not to wait.
On our trip back to Tucson, we drove down to Lake Havasu and after going through Lake Havasu City the road followed the Colorado River until we got to Parker. We saw several spectacular RV resorts located on the banks of the Colorado and we plan to research them for possible future visits.

Posted by David and Derita at 2:30 AM No comments: